With research revealing that there were a staggering 644,000 domestic burglary incidents in England and Wales last year alone[1] and with 70% of these burglars gaining entry through a door[2], it is now more important than ever that maximum-security locks are in place to offer protection from potential break-ins.

Platinum 3 Star Cylinder is Yale’s most secure lock yet

So much so in fact that Yale is offering a £1,000 guarantee in the unlikely event that the cylinder is snapped under attack due to a forced break-in.

In the event of a burglary or break-in taking place at a home due to a prolonged attack on a Yale Platinum 3 Star Cylinder, Yale will offer a goodwill payment of £1,000 for the inconvenience (subject to the terms and conditions*).

The Yale Platinum 3 Star Cylinder provides maximum security against known attack methods, it can be re-pinned at Yale’s head office in the Midlands and has been independently tested by BSI to be awarded the British Kitemarked TS007:2014 3 Star accreditation – a standard developed in response to concerns over cylinder attacks.

The 3 Star Cylinder has also been tested to the British Standard BS EN1303:2005 and is Secured by Design approved – meaning it could save homeowners money when it comes to renewing insurance premiums.

As well as being anti-snap, anti-bump, anti-pick and anti-drill, the Yale 3 Star Cylinder also features a sacrificial front section which secures the home in the event of a snap attack. 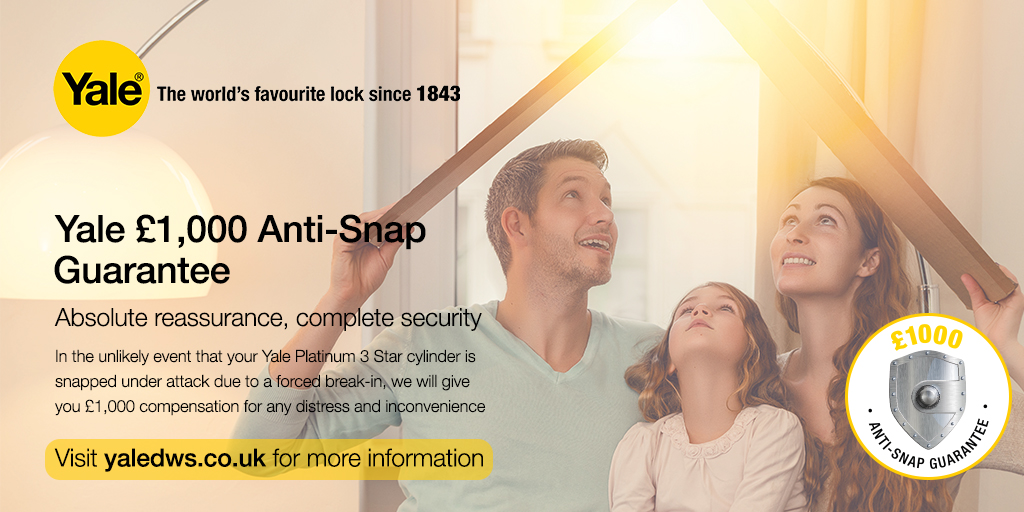